Le Petit Chenac and it's surroundings

The sun-drenched Charente-Martime has something to offer for every holidaymaker. It has a special mix of culture, nature, beautiful sights and the sandy beaches of the Atlantic Ocean. Within walking distance is the small harbour of Saint-Seurin-d’Uzet. In the main street is a general store selling basic necessities. Read below to discover our beautiful region. This overview is of course far from complete. There is an information folder in every holiday home: leaflets, maps and an list of the nearest and nicest restaurants and shops. Or ask us, we are happy to give you additional tips!

Le Petit Chenac is less than a kilometer from the Gironde! The Gironde is the largest estuary in Western Europe and is no less than 12 km wide, 75 km long and flows from Bordeaux to the Atlantic Ocean. It is a historic waterway. In order to protect Bordeaux at various times, all kinds of beautiful buildings and military complexes were built. A good example of this is the oldest lighthouse in France, Phare de Cordouan and the Citadel of Blaye. Characteristics of this area is the beautiful marshland, interspersed by white chalk cliffs, charming fishing villages and fishing huts (carrelets). The river, with its natural banks where fresh and salt water mix, attracts an enormous diversity of birds and fish. The Gironde is still the only site in Europe where the sturgeon breeds. 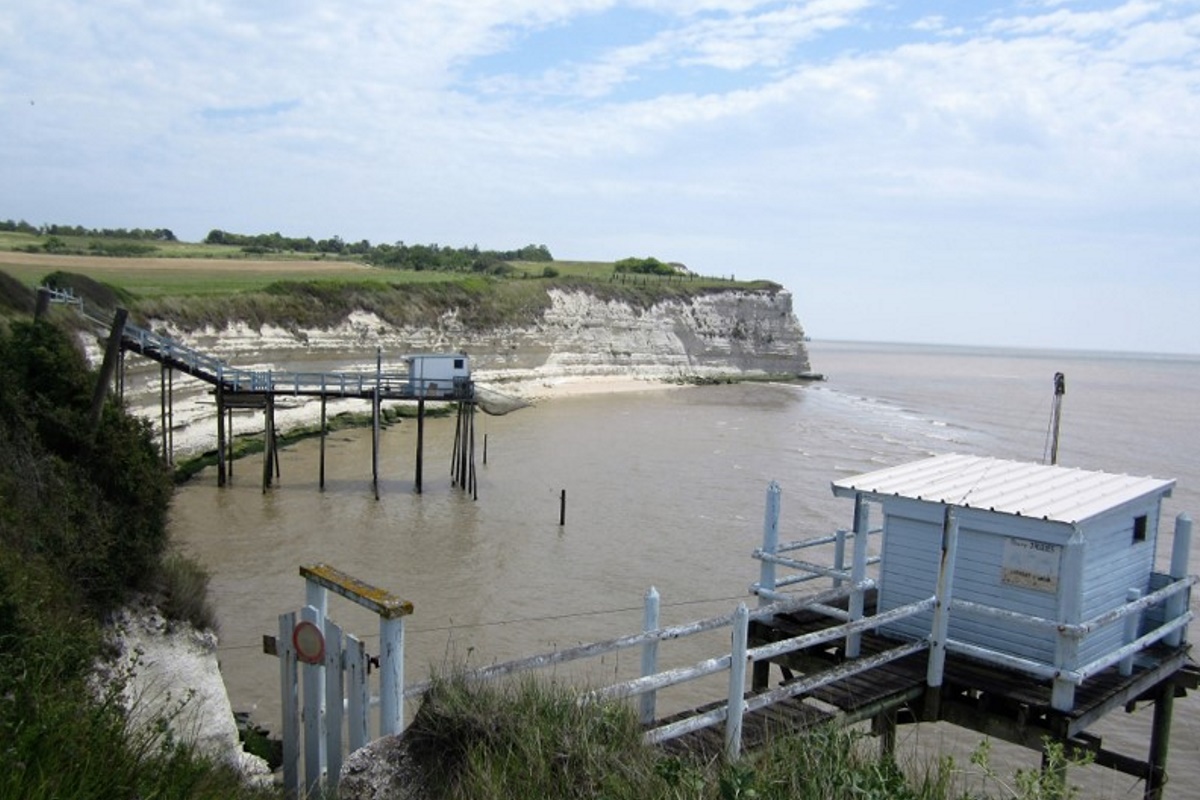 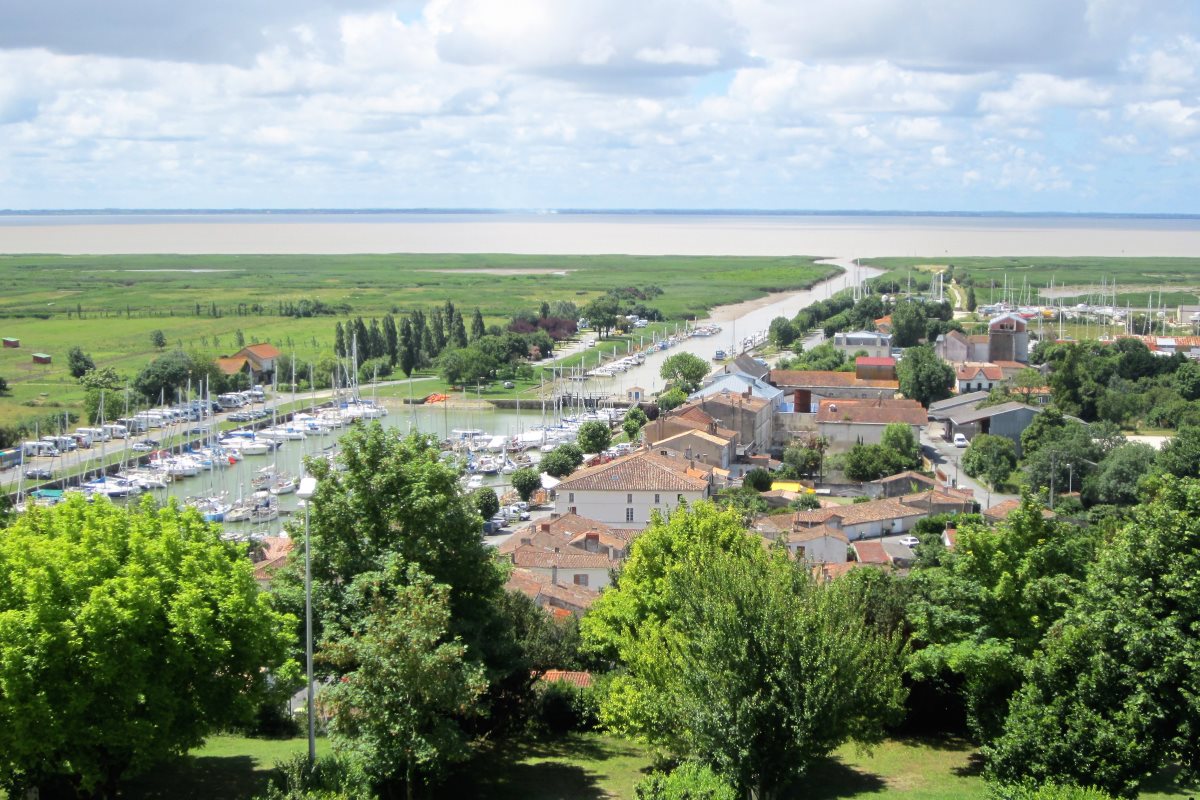 Mortagne was once one of the most important ports in our area. Currently it is primarily a pleasant marina, beautifully situated with a stunning view of the cliffs, also called falaises. There are several restaurants, terraces and a number of cabins, where you can get fresh local products such as fish and shellfish, local wines and even roast chicken. Nearby, at the foot of the falaise is a l’Ermitage Saint-Martial, which is open to visitors. In the Middle Ages pilgrims on their way to Compostela visited this chapel in a cave before crossing the Gironde.

This romantic fortress town is less than 7 km from our house. It is easy to reach via the route vert, a beautiful coastal road that runs from Bordeaux to Royan. There is also a nice bike path. The village is built on a limestone rock, jutting out into the Gironde and is considered one of the most beautiful and therefore most visited villages of France. Don’t miss the church of Sainte-Radegonde and the fishing museum. And why not enjoy a good glass of Talmondaise wine on one of the many terraces. 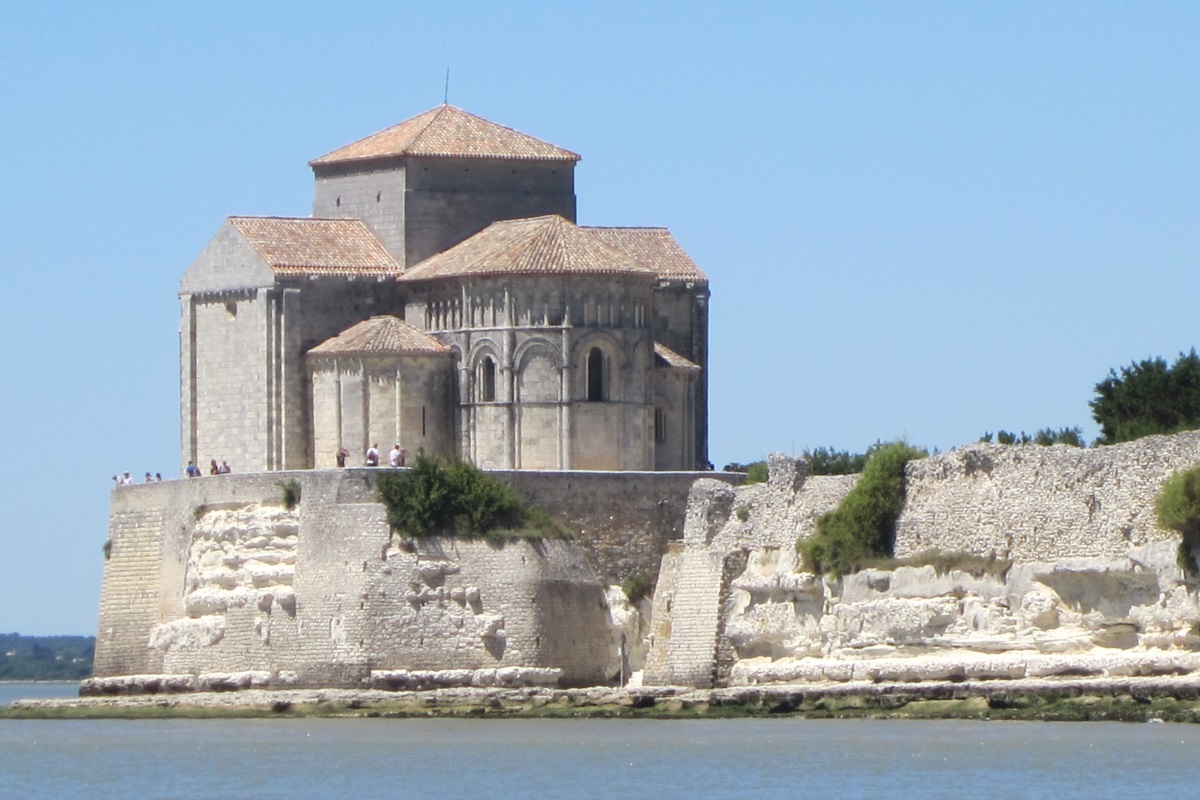 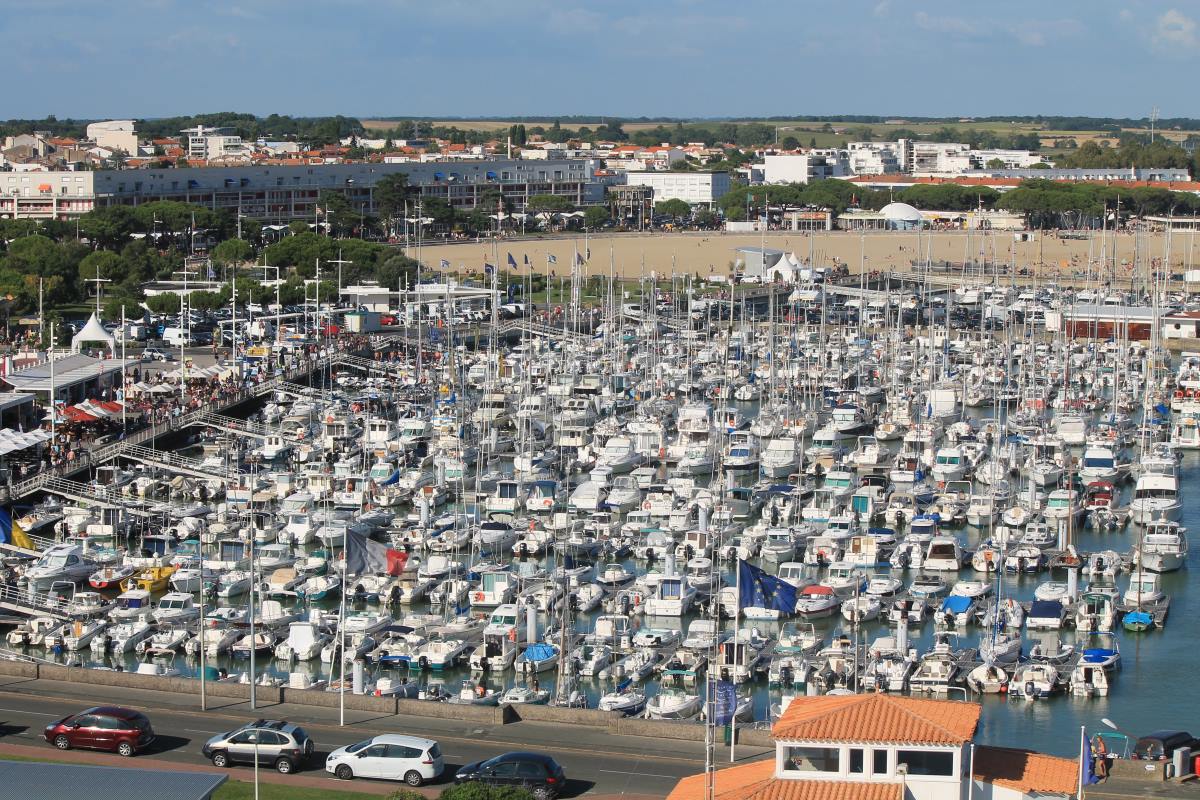 If you follow the coastal road via the smaller resorts of Meschers-sur-Gironde and Saint-Georges-de-Didonne you will come to the lively seaside resort of Royan. There is a large boulevard with an impressive marina and it is teeming with cafes, restaurants and boutiques. There is a ferry connection to le Verdon-sur-mer on the Médoc the other side of the Gironde. After the bombings of 1945 Royan was rebuilt and Notre-Dame Church dates from this time. It’s modern design using concrete and with atmospheric interior is very special.

See below a beautiful film about Royan and it’s surroundings

Saintes was originally a Roman city, more than 2000 years old, and is beautifully situated on the banks of the river Charente. Many of the old historic buildings have been preserved, such as the Gallo-Roman amphitheatre, the Roman Arch of Germanicus and the Abbey aux Dames. In addition to the various museums, Saintes is a beautiful historic town. You can shop here and there is a daily market. 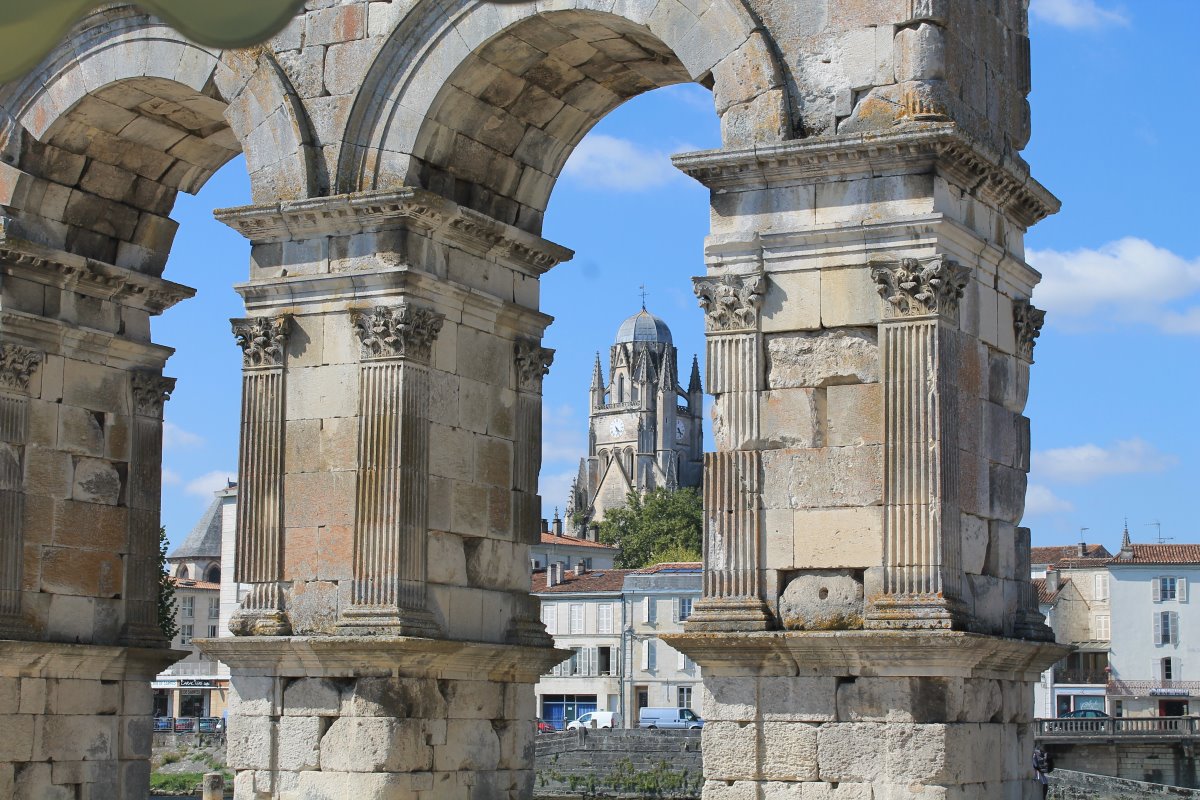 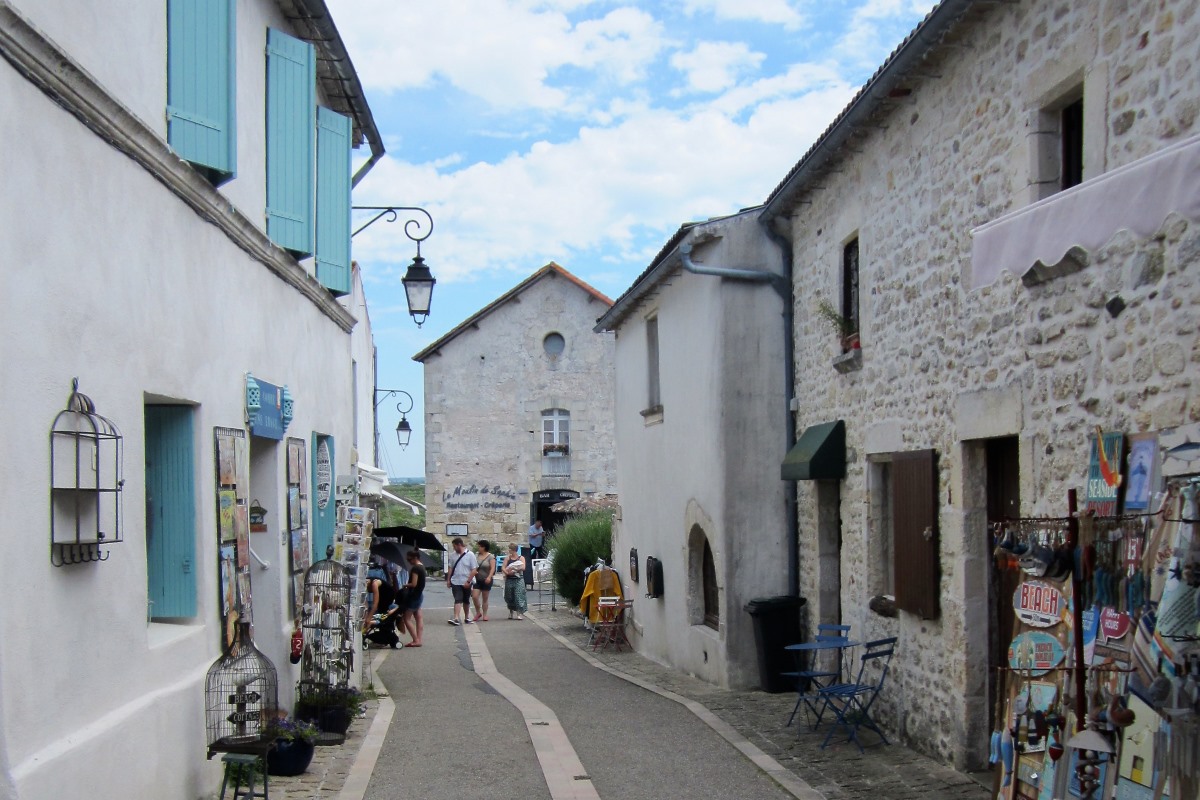 Mornac-sur-Seudre, just like Talmont, is a charming historic town with its own authentic atmosphere. Mornac is located on the river Seudre, close to one of the largest and best oyster areas on the French west coast. It is also a popular place for craftsmen. Around the harbour there are several restaurants and in the traffic-free centre there are numerous shops with art, clothing and local products.

This beautiful lighthouse is located at the mouth of the Gironde and is considered the most beautiful and oldest lighthouse in France. It is a historical monument and was built from 1584 to 1611 and is located in the middle of the sea. On the first floor is the royal apartment, at that time intended for Louis the 14th. One floor higher there is a real chapel with altar and stained-glass windows. The view from the lighthouse is beautiful and accessible via a spiral staircase with no less than 301 steps.

The boat trip to it is already an experience in itself. We booked our boat trip at “Cote de Beauté” in the port of Meschers-sur-Gironde (12 km). Along the coast with the beautiful chalk cliffs and beaches, you sail towards the lighthouse. Besides the visit to the lighthouse, it is also a nice place for a day out. Great for a picnic and a dip in the sea, but also for fishing or to search for crabs. 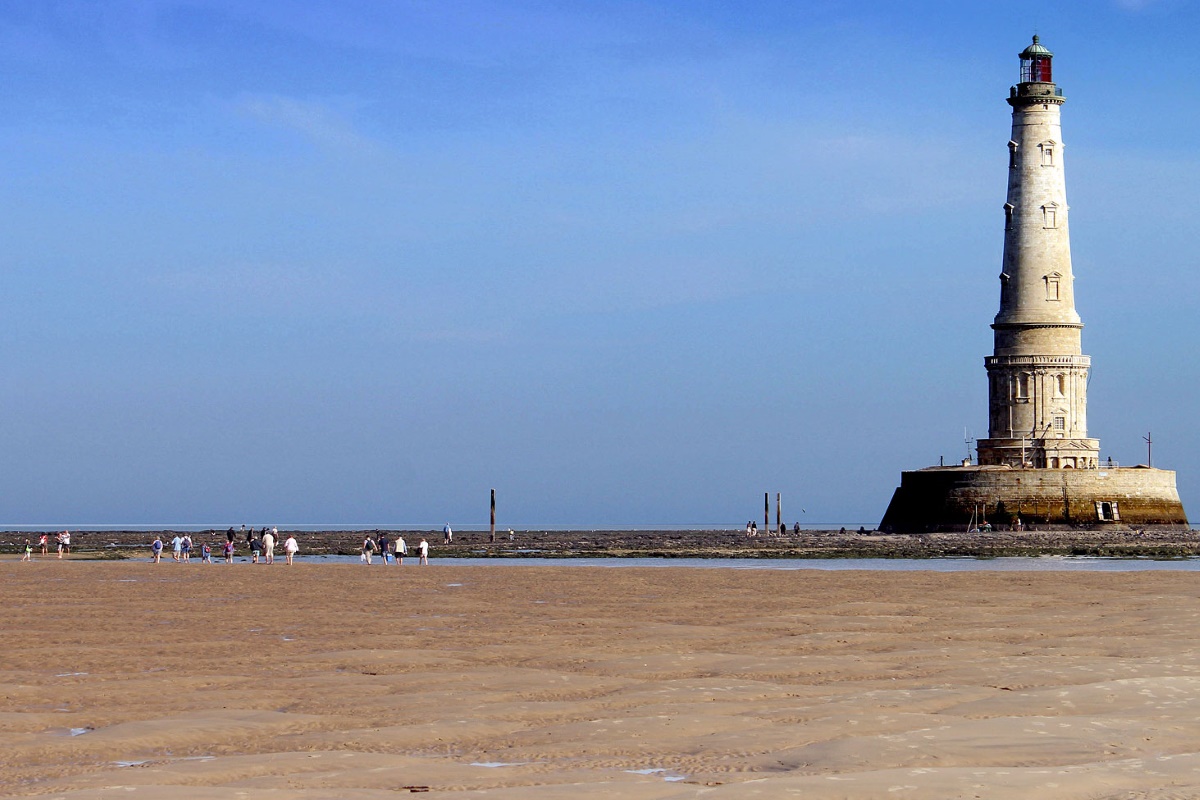 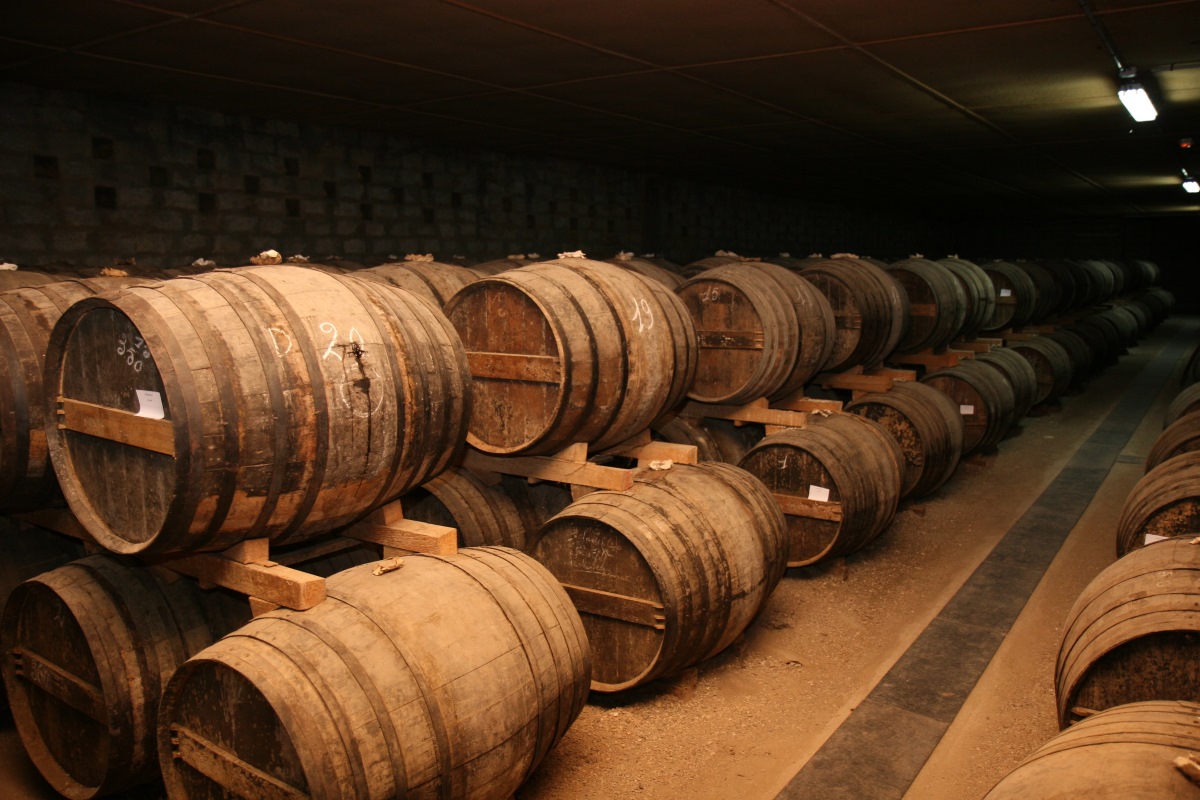 Cognac is an ancient Roman city located on the Charente river. There is a modern museum: Musée des arts du Cognac, well worth a visit and you can visit several famous Cognac houses, such as Rémy Martin and Hennessy. Cognac is also known for his music. Every year at the beginning of July the Cognac Bleus Passions festival takes place and is very popular among French and foreign blues lovers. During 5 days you can enjoy the musical ambiance. Most of the performances are free to visit during the day.

Ile d’Oleron can be reached via a 3 km long bridge. On the way to the island you can see everywhere the beautifully colored oyster huts and fish stalls.
Everywhere on the island there is a wonderfully relaxed southern French atmosphere. You centainly see this in the towns of Le Château d’Oléron and St-Pierre D’Oléron. The island is flat, unspoilt and nicely varied by its coast, forests and salt marshes. It is also a wonderful island for cycling. Beautiful white limestone bike paths are everywhere. Together with the Marennes basin it has 160 km of cycle paths. 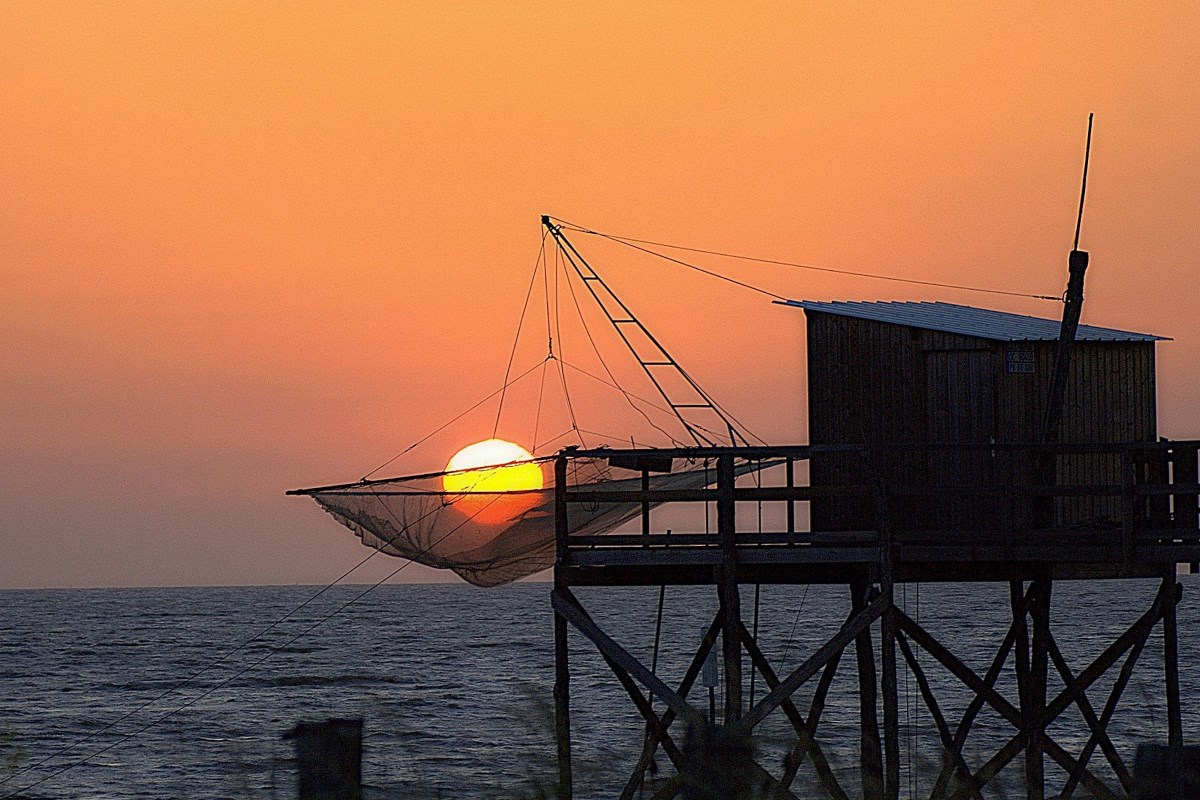 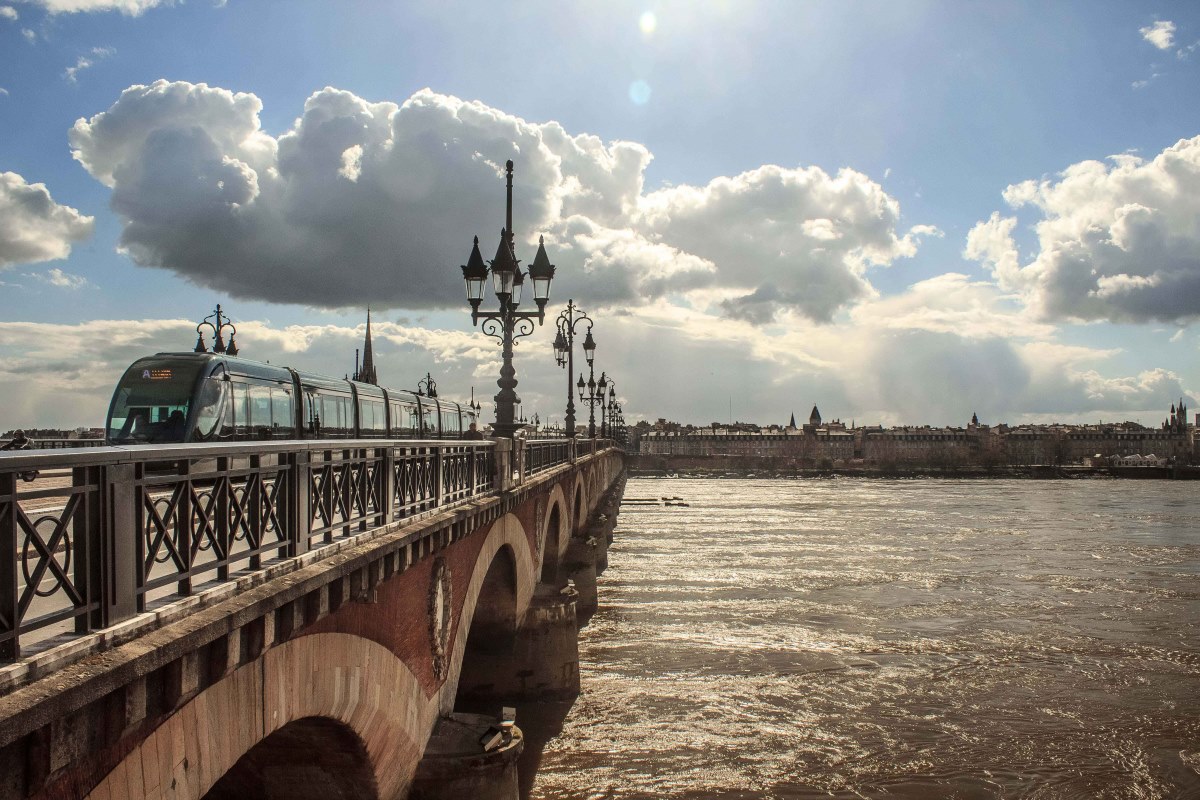 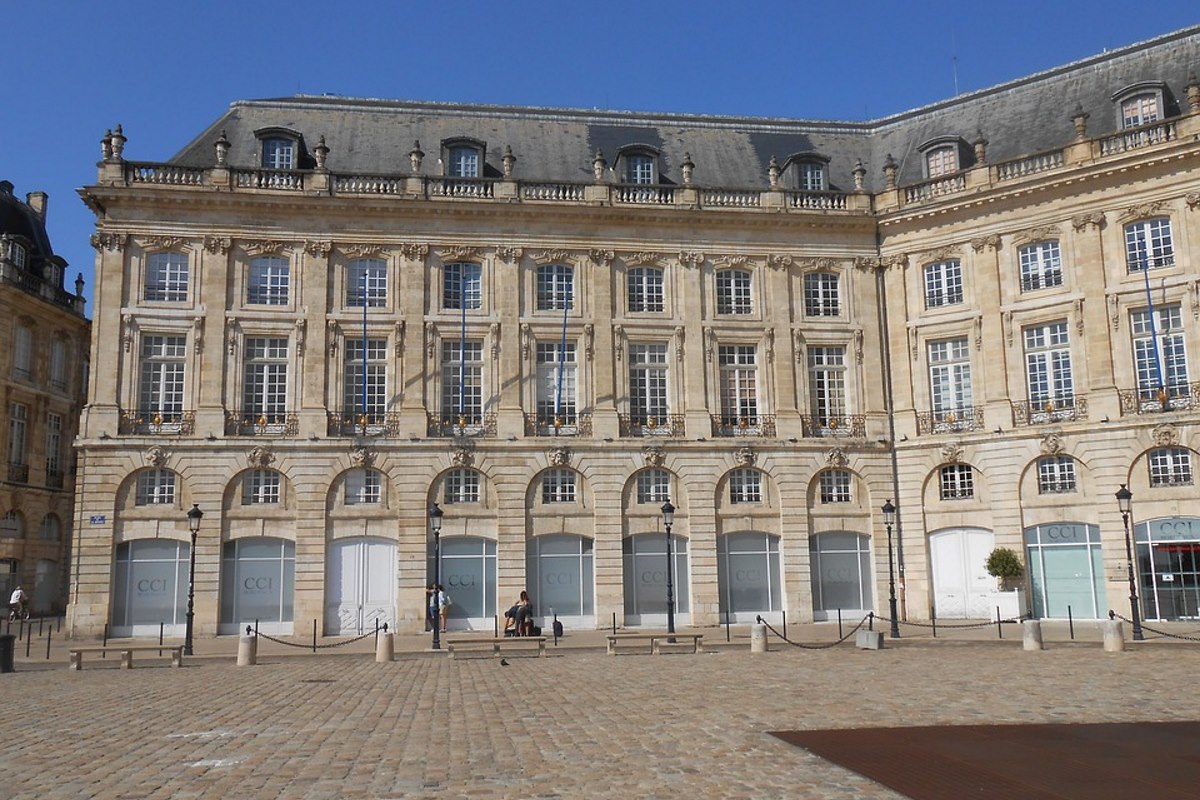 Bordeaux has been voted the best European destination of 2017!
It has a beautiful old compact center with a chic southern French look. This old part of Bordeaux has been on the UNESCO World Heritage List since 2007.
Above all, you can enjoy great food and shopping here, such as in the cozy entertainment district of Saint-Pierre. Everywhere in the city you can see nice squares, terraces and wine bars.
The city is separated into two parts by the river Garonne. There is a large boulevard along this street, where you can stroll around and see many joggers and skateboarders.

An iconic bridge runs over the river: Pont de Pierre. Napoleon Bonaparte commissioned it in the 19th century to build it. This explains the number of arches of the bridge: 17 in total and equal to the number of letters of his name. On the other side of the Garonne is the rising district Le Bastide with the hip alternative place Darwin, located in a former barracks. It is a location where you can wander around, everywhere you see cozy eateries and shops.

This island can be reached via a toll bridge and is located west of La Rochelle. It is very suitable for a day trip. You can also enjoy cycling here. In comparison with Ile d ‘Oléron it is smaller and has a more glamourous appearance. A typical charming town is La Flotte-en-Ré. A beautiful product of this island is the first potato from Île de Ré, these potatoes have a unique salty taste. 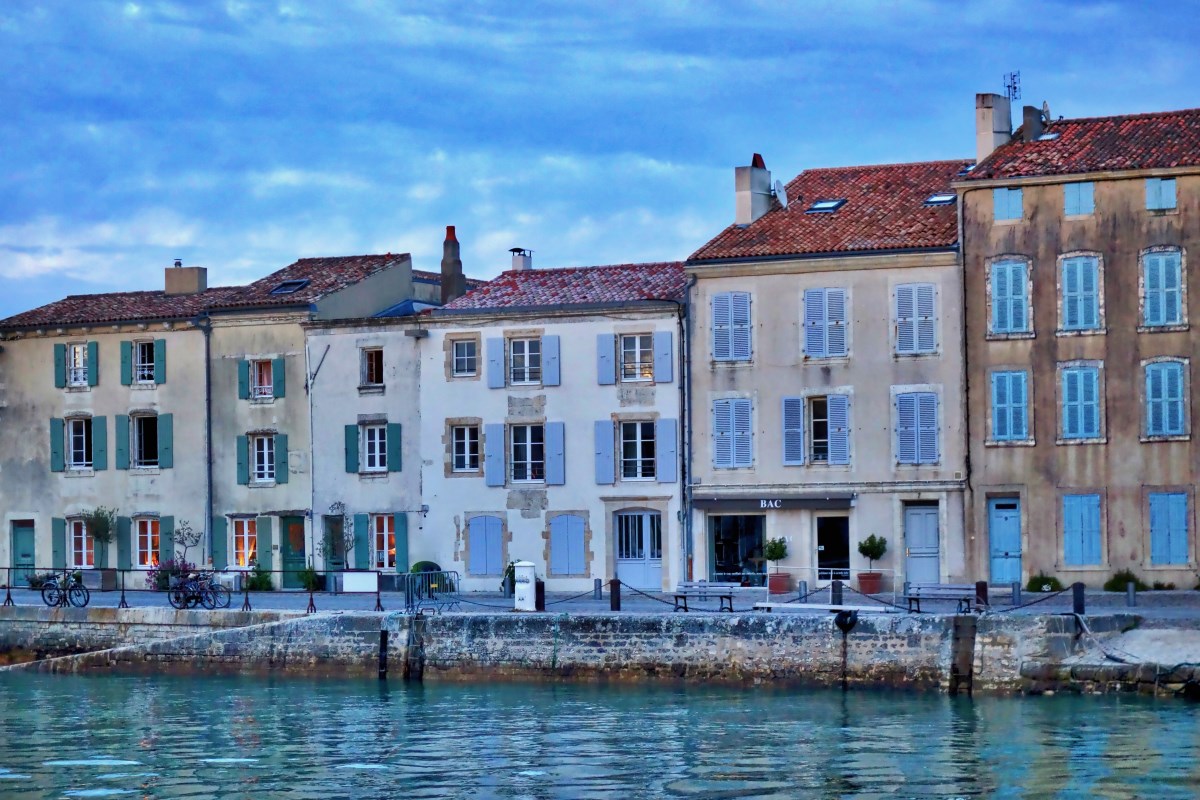 To get a good impression of the Island “Ile de Ré” check out the beautiful Drone recordings in the video below of Steven van der Heide.

RESERVATIONS OR QUESTIONS ABOUT AVAILABILITY ?